When the past catches up on you: Land-use impacts biodiversity in the long-term

Ghosts of land use past haunt the current biodiversity in farmland ecosystems according to a new study led by a researcher from the German Senckenberg Biodiversity and Climate Research Centre. The study on farmlands in South-Western France shows that changes from grassland to cropland that happened as long as 20 years ago result in the animal community on-site today exhibiting a lower diversity of mobility and feeding related traits, which are related to the functioning of agricultural ecosystems.. The study published this week in “Proceedings of the National Academy of Sciences” emphasizes the need to protect permanent grasslands in farmland ecosystems as a refuge for species, and the functional roles they perform, which would otherwise be lost.

In the past twenty years Europe’s countryside has experienced a drastic shrinkage of grassland in order to make way for cropland. The South of the department “Deux-Sèvres”, in Western France is a typical example of this: In 20 years, 30 per cent of the grasslands have been lost. The destruction of these grasslands has severe consequences. Researchers of Senckenberg Biodiversity and Climate Research Centre and its colleagues have found that this conversion impacts the range of characteristics of species inhabiting agroecosystems in the long-term, i.e. today.

“We know very little about the relationship between land-use history and present day biodiversity in farmlands. Previous research has shown biodiversity in farmlands to be heavily impacted by today’s current farming practices and the amount of semi-natural habitat in the landscape. With this new study we can now show that past land-use in farmlands is at least as important as these other factors“ Dr Gaëtane Le Provost, researcher at Senckenberg Biodiversity Centre, who led the study, said.

She and her team looked at 75 grassland sites in the study area for which land-use changes has been recorded from 1994 till 2014. Land-use records helped to infer how long nearby fields have been croplands, how long the grassland has been there and how often the turnover between crop and grassland happened. They also sampled which plants, wild bees, hoverflies, grasshoppers, ground hunting beetles, spiders, and birds are present on the grassland sites today.

“The ecological communities of grassland sites in landscapes that have been croplands for a long time, and are not surrounded by permanent grasslands, are more homogenous in their traits. It is not that there are necessarily less species today, but that the species present are functionally very similar. In particular, they have more similar movement and feeding strategies than in permanent grasslands. Farmland conversion kills off the specialists in the long-term and thus creates what we call an extinction debt”, said -Dr. Peter Manning, co-author of the study, who leads a research group at the Senckenberg Biodiversity and Climate Research Centre.

Since many ecosystem processes (e.g. pollination, nutrient cycling or pest control) rely on species with specialized feeding and mobility traits, homogenization of the animal community and the loss of these species may reduce ecosystem functioning in the future. The team also found that past land-use especially affects species at the lower end of the food chain – in this case grasshoppers, bees and hoverflies. They reason that a delayed response to past land-use in higher levels of the food chain might result in a temporal mismatch between interacting levels of the food chain.

So should we look back in anger? “I’d rather look to the future. One of our findings was that the presence of permanent grasslands in the surroundings mitigates that loss of species that are not very mobile and also specialist feeders. The permanent grasslands serve as a kind of refuge for them. Therefore, it should be a priority to protect the remaining permanent grasslands in agricultural landscapes. This would benefit the whole agroecosystem”, concludes Le Provost. 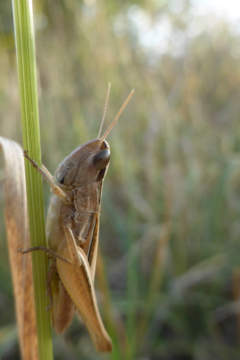 The study found that past land-use especially affects specialised species at the lower end of the food chain such as grasshoppers. 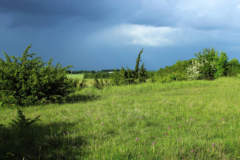 One of the studied grassland sites in the department Deux-Sèvres in South-Western France.