Between otters and Deadheads

Grateful Dead were an American rock band who gained fame for their pioneering role as the fathers of psychedelic rock music, and for their devoted fan base known as Deadheads. What happens when a Deadhead becomes a palaeontologist and describes a new fossil? Exactly, passion meets passion, and out comes a fossil otter named after Grateful Dead founding member Bob Weir.

God of the Guitars

Ask any person on the street whom they think was the greatest guitarist in the history of rock music and you are likely to hear the name Jimi Hendrix. Although his active career lasted only a few years, he left one of the most lasting and influential electric guitar legacies. Hendrix passed away far too early, although rumor has it he was called to teach the angels guitar lessons.Thanks to the fossil fishgenus Hendrixella, he attained some degree of immortality.

Poseidon and the Crimson King

Progressive rock and palaeontology obviously fit very well. The album ‘Thrak’ by British progressive rock legend King Crimson includes the song ‘Dinosaur’ featuring the lines ‘When I look back on the past it’s a wonder I’m not yet extinct’, as if they had predicted that their guitarist Robert Fripp would be chosen as name patron for a fossil genus. Frippia is not a dinosaur, as suggested by the song title, but an extinct fish and, as such, matches another masterpiece by King Crimson: the album ‘In the Wake of Poseidon’.

If any rock musician deserves to be immortalized by a fossil fish, it is Chris Squire! He gained fame as bass player and founding member of British progressive rock band Yes, and was commonly known by his nickname ‘Fish’. The latter is associated most obviously with Squire’s 1975 solo album ‘Fish Out of Water’ and the 1971 solo piece ‘The Fish (Schindleria praematurus)’. Furthermore, the term ‘bass’ refers not only to the instrument but also to a particular group of fish, and Squire’s astrological sign was Pisces. Last but not least, rumor has it that Squire accidentally flooded a hotel room in Oslo while on tour.

The archenemy of pretence

The brittle-star genus Melusinaster was recently discovered to be a transitional fossil linking two conspicuously different living relatives: the ‘normal’ brittle stars on the one side and the basket stars, or Gorgon Heads, on the other side. This was only unveiled thanks to critical in-depth research, hence the reference to the mythical figure Melusina. The process of fleshing out the big picture in science is in many respects comparable to the intense, passionate and dedicated approach to music by Swedish death metal band Arch Enemy and their vocalist Alissa White-Gluz.

We are all stardust

Few musicians have been as widely recognized and respected throughout the world of music as David Bowie. He was, and still is a landmark influence in pop music and culture and even considered by some as the greatest Rock Star ever. His inclusion in the Rock Fossil hall of fame was overdue. An ancient wasp pristinely preserved in 100 million years old amber is a worthy commemoration of Bowie’s flamboyant stage shows and characters including the iconic Ziggy Stardust.

A dinosaur of a rockstar

Sometimes music can literally drive discoveries. The scientists who discovered the dinosaur Masiakasaurus knopfleri claimed that whenever they played Dire Straits in the quarry, they would find more bones, and when they played something else, they would not. With more than 50 years of professional activity, Mark Knopfler is certainly among the dinosaurs of rock music. Accordingly, he received his exceptional saurian honours with both pleasure and self-mockery and even asked to buy a replica of the Masiakasaurus skeleton.

Head in the stars, feet in the water

Sensitive and poetic animals, cephalopods (from the Greek kephalópoda, head-feet) make us cross time, because they have existed for a very long time. Belemnites are best known for their projectile-shaped rostrum, such as that of Parapassaloteuthis francoizbreutae, which roamed the shores of the Armorican Sea between present-day Normandy and Brittany. 180 million years later, singer-songwriter Francoiz Breut from Cherbourg wears her musical suit and immerses herself in the sibylic depths of the human soul, observing strange floating creatures, between naturalistic reverie and timeless romanticism.

Norwegian folk rock phenomenon Katzenjammer are one of the very few bands to deliver a metal-like level of musical intensity and passion without actually playing metal. Whoever experienced them live will acknowledge that they are more than worthy members of the hard and heavy hall of fame. Furthermore, they stand out in being one of the very few female rock bands in a still strongly male dominated domain. No wonder the Katzenjammer Rock Fossil belongs to a genus of brittle star named after Adam’s biblical female equivalent and first wife at eye level.

The emperors of sand

What keeps you going when you spend the night shifts in the electron microscope lab analyzing microfossils which, for normal people, are nothing but sand? Exactly, passion, but sometimes even the most powerful dedication has to be fueled by some ass-kicking tunes. The music by heavy metal legends Mastodon happened to be played in the right place at the right time when palaeontologist Ben Thuy discovered that one of those sand grains, in fact, represents a microscopic fossil of a new brittle star species.

Among the major challenges in scientific research is to understand complex phenomena and convey their essence as concisely as possible. Progressive rock music often operates along the same lines, producing catchy, accessible tunes that burst, in fact, with technical complexity. No wonder some scientists use progressive rock music as a magic source of inspiration to advance their creative work. Fossils like the extinct brittle star Lapidaster hystricarboris named after British prog rock legend Porcupine Tree pay homage to this clandestine progressive work alliance.

Of passion and success

The Beatles and the trilobites share a very special feature: they were both the most successful group in their respective domain. No other Paleozoic fossil lineage was more widespread than the trilobites, and no other rock band sold more records than the Beatles did. Yet, outstanding characters like John Lennon are those who embody and transmit the passion beyond sheer success. And palaeontology is the passion that makes sure Earth sciences are not all about mining and engineering.

The most influential of its kind

Anyone with even the slightest knowledge on fossils will have heard of trilobites. Few other groups have left a similarly deep and lasting impression in the public appreciation of fossils. This certainly holds true for legendary Miles Davis when it comes to jazz music. He is widely recognized as the jazz musician who has had the most profound effect on rock, which makes him a more than worthy member of the Rock Fossils family. 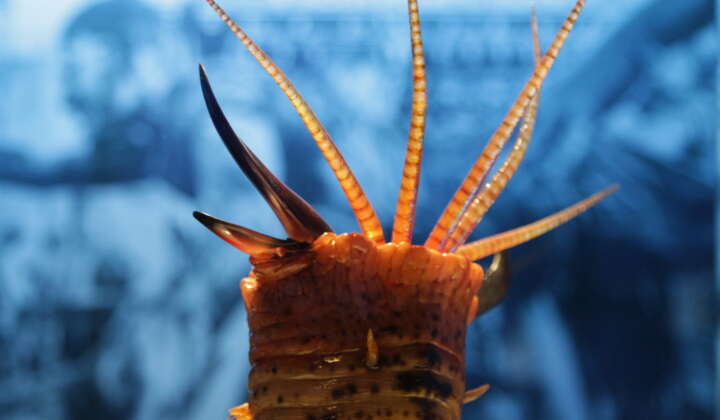 Your donation for the Senckenberg Society

With your donation, you help the Senckenberg Society to conduct natural scientific research and make our results accessible to the public through publications, exhibitions, educational projects, and many other initiatives.

Thank you for your support!