A species of cladoceran believed to be extinct has been rediscovered

In a lake in Finland, Senckenberg scientist Kay Van Damme rediscovered in collaboration with an international team a species of water flea that had long been considered extinct. While there are numerous fossil records of this cladoceran species, researchers were now able to document the first living specimens. Based on the small crustacean’s morphology, the scientists were able to describe the animal as Rhynchotalona latens, thereby revising its previous taxonomic assignation. Water fleas serve as important indicator species for modern as well as past ecosystems. The studies were recently published in the scientific journals “Hydrobiologia” and “Zootaxa.”

Water fleas – tiny crustaceans from the group Cladocera – usually only measure between 0.2 to 2 millimeters. “This is a likely reason why these animals, albeit widespread in all aquatic habitats, are frequently overlooked and are counted among the so-called ‘invisible biodiversity’,” explains Dr. Kay Van Damme of the Senckenberg Research Institute in Frankfurt, and he continues, “Despite their small size, water fleas serve important functions as filtering organisms, detritus eaters, and part of the food chain in ecosystems. Moreover, they are valuable ecological indicators – today as well as in the past.”

Together with a Finnish team, the biologist from Frankfurt rediscovered a species of water flea believed to be extinct in several lakes in Finnish Lapland. Lead author Dr. Liisa Nevalainen of the University of Helsinki recounts, “Until now, this species was only known from the fossil record. Imagine our surprise when we discovered these tiny crustaceans in five out of nine lakes in Northern Finland sampled with a 100 micrometer-net as part of a field expedition!”
Based on their morphology, the rediscovered water fleas were subsequently placed in the genus Rhynchotalona, known since 1903. The minute crustaceans inhabit shallow lakes with a high proportion of organic matter, where they feed on substrate at the lake bottom.

“The oldest fossil records of Rhynchotalona latens go back about 10,000 years – this water flea genus has therefore been around for quite a long time. The study of recent and fossil water fleas helps us to understand how aquatic life develops and adapts in the face of changing climate and environmental conditions,” adds Van Damme in closing. 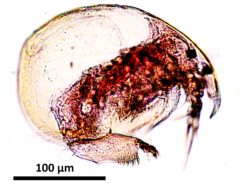 This Finnish lake revealed the first living specimen of the water flea.