Madagascar Copals Turn Out to be Resin

Findings do not have a paleontological, but a recent value

Together with an international team, Senckenberg scientist Mónica Solórzano Kraemer examined the age and origin of the “Madagascar copal.” In their study, published today in the scientific journal “PLOS ONE,” the researchers conclude that the petrified resin has an age of no more than a few hundred years and is therefore of no paleontological relevance. However, the resins may be used to document the current species loss on the East African island.

Due to their numerous insect inclusions – some of the transparent stones contain entire midge swarms – the so-called “Madagascar copals” are a favorite collector’s item among fossil enthusiasts. “And because of these inclusions, the Malagasy ‘copals’ also play an important role in science. Over the past 20 years, dozens of scientific papers have been published on this topic, and around 120 new species were described,” explains Dr. Mónica Solórzano Kraemer of the Senckenberg Research Institute and Natural History Museum in Frankfurt, and she continues, “Surprisingly, the age and origin of the copals has never before been studied in detail.”

The amber researcher from Frankfurt now pursued this question together with her colleagues Xavier Delclòs (Universitat de Barcelona) and Enrique Peñalver (Instituto Geológico y Minero de España) from Spain and Voajanahary Ranaivosoa (Université d’Antananarivo) from Madagascar. The researchers set out in search of copals in three regions on the island, and subsequently dated their findings by means of the radiocarbon dating method. The results of the 14C dating came as a surprise. None of the examined specimens was older than 300 years. “Moreover, all of the resins originated from amber trees (Hymenaea) that have inhabited Madagascar since the Miocene, i.e., a time period about 5 to 23 million years ago. Yet, we were unable to find a single piece of amber or copal that dates back to this epoch,” adds Solórzano Kraemer.

According to the study, the “Madagascar copals” and their inclusions can therefore not be used to draw conclusions about past living environments and their changes. Rather, the team of scientists assumes that the insect species described to date were captured and preserved in a piece of resin with an age of only a few hundred years.
“Nevertheless, the specimens have a high value – with their aid, we can detect changes in the species composition in the biodiversity hotspot of Madagascar during the past 300 years, and we can see which species have already become extinct as a result of the heavy deforestation on the island,” explains Solórzano Kraemer, and she cautions, “However, previous species descriptions from the Madagascar ‘copals’ must be critically checked to prevent taxonomic errors and faulty conclusions about paleontological habitats!” 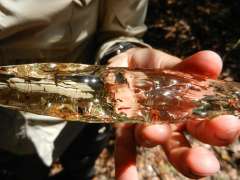 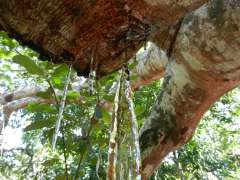