Flexible Apes: How Orangutan Mothers Communicate With Their Offspring

Together with a Swiss-German team, behavioral scientist Dr. Marlen Fröhlich from the Senckenberg Centre for Human Evolution and Palaeoenvironment at the University of Tübingen has studied mother-offspring interactions in orangutans. The team paid particular attention to individual differences and flexibility in the communication strategies of orangutan mothers, which they studied both in the wild and in zoos. In their paper, published today in the journal “Proceedings of the Royal Society B,” the researchers show that the ape mothers adjust their communication highly individually to various social contexts. Differences exist not only in the composition of their gestural repertoire but also in their communicative tactics and responses to the requests of their young, irrespective of the environment.

In the wild, orangutans are usually encountered alone or in very small groups. Enduring bonds exist only between mothers and their young. But this particular bond lasts for a long time: an orangutan mother spends up to nine years preparing her infant for life on its own. “The mother-offspring relationship in orangutans is therefore ideally suited for our study of intraspecific communication in great apes,” explains Marlen Fröhlich, and she continues, “Despite their reputation as ‘solitary apes,’ orangutans have a rich repertoire of tactile and visual gestures, both in captivity and in the wild, which they use in a variety of social contexts.”

Fröhlich and a team from Switzerland and Germany now investigated the degree to which the orangutans’ communicative behavior varies between individuals, and how it is simultaneously adjusted to different social conditions. She explains, “To this end, we studied the differences in the infant-directed repertoires of orangutan mothers. We did this by analyzing the similarity of gestures between individual mothers living either in captivity or in the wild.” In addition, the team analyzed how female orangutans’ communication patterns change in different social contexts, such as food sharing or social play. The researchers analyzed a total of 4,839 video recordings of 13 Bornean (Pongo pygmaeus) and 13 Sumatran orangutans (Pongo abelii).

“The gestural similarity among both Bornean and Sumatran orangutan mothers differ markedly when the apes live in different environments. This finding is consistent with previous comparisons between animals living in the wild and in zoos. More surprisingly, orangutan mothers exhibit significant behavioral flexibility at the individual level. They communicate and respond differently depending on the social context,” summarizes the scientist from Tübingen, and she gives an example, “While one mother primarily complies with her baby’s begging behavior but not in other contexts, another readily responds to her youngster’s demands across all social contexts.”

Based on these findings, the researchers conclude that the communicative behavior and social responsiveness of orangutans varies between individuals while at the same time also being flexible. Thus, orangutan mothers differ not only in the composition of their repertoire of gestures directed at their offspring, but also in their communicative tactics, such as gestural repetition or responding to their infants’ demands. 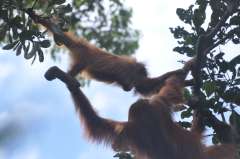 While one mother primarily complies with her baby’s begging behavior but not in other contexts, another readily responds to her youngster’s demands across all social contexts. Photo: Fröhlich